Aap Ki Antara recognized as 'Best Serial of the Year' 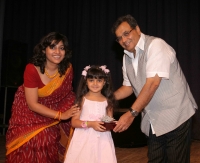 Zee TV's popular show, 'Aap Ki Antara' has been bestowed an honour of being the Best Serial of the Year 2009 by the Varisht Nagrik Kesari Club, a social wing of  leading Hindi newspaper, 'Punjab Kesari'. Impressed by the show's earnest social cause of spreading awareness about Autism amongst its viewers the channel and the lead character of the show, Zaina Vastani (5 years) were felicitated at a grand event at the Capital. The nominations and the winners were chosen through the readers' survey conducted by the publication. The grand event was attended by around 2000 people with renowned filmmaker Subhash Ghai being the Chief Guest of the evening. Little Zaina was overwhelmed by the appreciation and attention received from the dignitaries and the viewers.

'Aap Ki Anatra' is a survival story of an autistic girl Antara. As a part of the show's telecast the channel has launched a helpline for Autism queries from its viewers. Special videos of real-life parents of autistic kids have been telecast at the end of every episode to make the viewers aware of the symptoms and corrective measures on Autism. These noble initiatives by the channel have garnered a lot of queries and feedback on the show from across the country and abroad. A lot of couples have posted their heart-wrenching stories to the channel. Zee TV has also been partnering with various workshops arranged for parents of the autistic children which can help them cope up with their kids' behaviour and thereby help them lead a normal life.

Commenting on this success, Ajay Bhalwankar, Programming Head, Zee TV, said, “The show has been awarded due to its path breaking concept and amazing response from the audience. Zee TV has always been the pioneer of raising social issues and creating awareness and so through 'Aap Ki Antara' we have aimed to create public awareness about Autism and sensitize the society towards this issue. With such encouraging feedback, the channel has once again lived up to its tag line of 'Har Pal Banaye Ek Naya Rishta' and established a special bond with the viewers.”