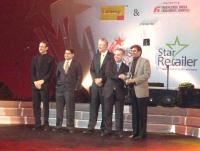 Kidzee has been awarded the Best Franchisor Award in the pre-school category, for the fourth consecutive year, by Franchising India Holding Ltd. The award was given at a grand ceremony in New Delhi on December 12, 2007. The Award was received by Arun Khetan, CEO, Zee Interactive Systems Ltd (ZILS).

"KIDZEE has been consistently winning this coveted award and this year's victory is definitely a feather in our cap," said Khetan.

Franchise Awards 2007 is one of the prestigious awards in the field of franchising in India and is organised by Franchise India Holding Ltd. KIDZEE is Asia's largest chain of Pre-schools with over 700+ pre-schools in 265 locations in India and abroad through a franchise model. It provides theexperiences for physical, intellectual, aesthetic, emotional and social development of the child, through creative and modern education, in an attractive and caring environment.