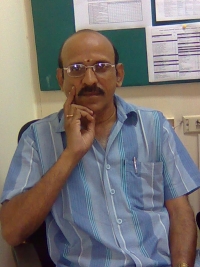 V Chandra Sekhar who heads the fiction department of Zee Telugu is the proud recipient of the AP State Government's Nandi Award for his best screenplay writing contributed to the serial Bommarillu.

Sekhar has been with Zee Telugu as fiction head from past one year. He has successfully launched eight mega serials, all of which are performing well with high TRPs on Zee Telugu. Andhra Pradesh Government's Nandi Awards are presented annually for the best performers in different categories in the television industry. The Government of Andhra Pradesh has been presenting these awards since 1990. The winners are selected by the Government constituted committee. The Nandi awards committee headed by veteran Director Muthyala Subbaiah this year, announced the winners for the year 2007 at a press meet held at FDC, Hyderabad. Muthyala Subbaiah said, "The selection was made purely on the basis of merit, without any partiality. We are hopeful that the general public, TV lovers and the industry would appreciate our selection." Zee Telugu CEO Sanjay Reddy said, "We are extremely proud to have such commendable talent as part of this formidable team."