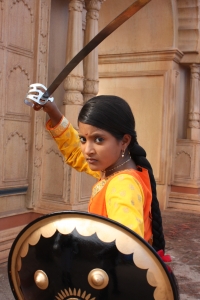 Zee TV's popular dance reality show Dance India Dance has won the 'Most Successful Show of the Year award' and Ulka Gupta who plays the title role of Manu in Jhansi Ki Rani has won the 'Best Entertainer of the year, Television' award in the Female category.

Dance India Dance, ever since its inception, has been a winner in the reality show genre across the Hindi GEC's. The popularity of the show comes from its unique format and extremely gifted mentors who have left no stone unturned in bringing out the best in the contestants and showcasing dance forms hitherto unheard of. The show is all about unseen talent and great dancing!

The award was presented by renowned actress Durga Jasraj and film director Ramesh Sippy to Mr. Nitin Vaidya (COO ZEEL and Business Head, Zee TV) and Ashish Golwalkar (Non-Fiction Head, Zee TV). Ulka Gupta, herself, was present to receive her award. In her speech, Durga Jasraj pointed out that this was a very obvious choice and there was no competition to beat the mass appeal of the show.

On this momentous occasion, Ashish Golwalkar, Non-Fiction head- Zee TV, said, “I take this opportunity to thank everybody associated with Dance India Dance. The show is straight from the heart and I'm extremely delighted and overwhelmed that our honesty and dedication has paid off rich dividends. Being unanimously chosen at FICCI has put us on another pedestal altogether”.

Nitin Vaidya, COO ZEEL and Business Head Zee TV, added, “It's celebration time. We have an award each both in the fiction as well as non- fiction category. Dance India Dance has become a cult amongst the youth. Even IPL hasn't been able to shake its ratings. I congratulate Manu for her tremendous grit, stamina and dedication. She is supremely talented and has a great future. Nobody would have done better justice to the character of Jhansi than her”.