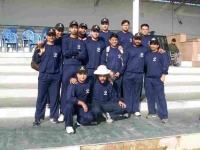 The "Zee Turner Cable Cricket Tournament" was a friendly series of cricket matches played between Incable, Digi cable, WWIL and Zee Turner. The winner of this thrilling cricket tournament was the Incable team that won the tournament by 4wickets.

Three matches were played at the tournament where the preliminary matches where for 5 overs and the final match was for 10over each side. In the first match, which was played between Zee Turner and Incable, Incable won the toss and decided to face the balls. The Incable batsmen with their stupendous batting made a score of 61 runs in the first inning. The Zee Turner team tried to chase the large score set by the Incable team but Incable won the match with a huge margin. The host team went down fighting while chasing a mammoth score.

In the second match between Digicable & WWIL, Digicable after winning the toss put the WWIL squad to bat who scored 30 runs in the prescribed 5 overs. In response to the 31 runs target, Digicable started with a smooth opening and reached the finals of the Zee Turner Cable Cricket Tournament by defeating WWIL by 8 wickets.

The Final match between Incable and Digicable was remarkable for everyone present at the stadium. Incable won the toss and chose to bowl. The batsmen of Digicable did not spare any ball and made a score of 62 runs for Incable to chase in the first inning. Incable started with a smooth opening but in the middle lost a few wickets. However, the team's batman fought every ball and came out victorious. Incable wrapped up the game in the second last ball of the tournament and won the match.

The final match was followed by awards ceremony where Prashant Singhal, Zonal Head, Zee Turner Limited and Kulvinder Singh Sabharwal, State Head, Zee Turner Limited gave out the Zee Turner Cricket Cable Tournament trophy to the captain of the winning team. Dilpreet Singh of Incable was given the title "Man of the Series" & "Man of the Match" for his magnificent performance, Yashpal of Incable & Rajbeer Bharti of Digicable were declared "Best Bowler" & "Best Fielder" respectively.