ItzCash Card chosen as the Product of the Year 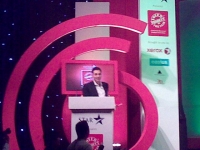 At an event in Mumbai's Taj Land's hotel ItzCash won the 'Best Multipurpose Prepaid Cash Card' award. The results at the awards were based on the report by A. C. Nielsen. The research agency conducted a survey with a sample size of 40,000 people across various cities and sectors.

Speaking on the occasion, ItzCash Managing Director Naveen Surya said,” we are ecstatic on receiving the Product of the Year award. This award is a special one as it is the consumers who have the say in making us the winners”. The 'Product of the Year' award provides the platform for the companies to be valued directly by the consumers. The forum offers the consumers to make their voice heard through the largest consumer survey of its type in India. The research is unique in its intention as well as in its size. As a matter of fact, 'Product of the Year' is the first consumer research exercise, which specifically asks the consumer about the interest of new innovative products currently available to them. The consumers, thousands in number, went through a face-to-face interview in filling-in the survey and yielding the results. The survey was based on three aspects:* Which product holds most appeal;* Which is always/most frequently used; and* Of those used, which is the most appealing.The Award was preceded by a competition where participants had to file their entries by April 1, 2008. The initial results were announced to the entrants on September 10, 2008. After this the agency commenced its national research. The ultimate winners were declared to the public January 17.The jury at the competition comprised of all industry leaders and experts from the spheres of manufacturing, marketing and the press.