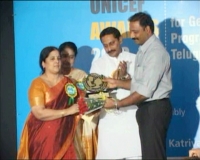 In a recent achievement Zee 24 Gantalu was awarded by the UNICEF for its gender sensitive programs. The program 'Chidramautunna Balyam' was awarded for social change initiative. The program was telecast on December 14, 2009. The story revolves around child abuse caused by the parents and teacher for momentary pleasure in a land where the belief is 'Matru Devobhava…Pirtu Devobhava…Acharya Devobhava.' The key message in the program was let's work to stop Perishing Childhood.

It was a great moment of pride for the channel as UNICEF voluntarily came forward after monitoring over 3000 episodes, across various Telugu News channels during November and December 2009. The team behind this achievement was:

An elated channel Business Head Shailesh Reddy said, “Zee 24 Gantalu has always been in the forefront when it comes to response towards social issues. The channel on earlier occasions has brought into light several issues that concern the social fabric and was appreciated for its efforts. The channel will continue to focus on issues of importance to the society.”