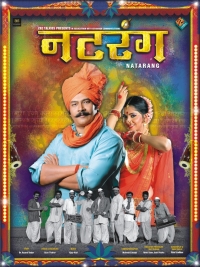 Zee Talkies' NATARANG, undoubtedly one of the most talked about and highly appreciated films of recent times has risen more standards by winning the 'Best International Marathi Film - Sant Tukaram Award' at the Pune International Film Festival. This award for Natarang was in recognition for the film as a whole as well as the direction by ad-man Ravi Jadhav. The cash prize of Rs. 5 lacs and a trophy were shared by the director as well as the producer.

Along with this top honour, Atul Kulkarni, Natarang's lead star was applauded by being bestowed with the 'BEST ACTOR' award as well a cash prize of Rs 25,000/- for his magnificent performance in Natarang. Even Kishore Kadam who plays a pivotal role in Natarang won the 'performer of the festival' award. Special mention was made by the Jury for Kishore Kadam for his excellent performance in the film Natarang, Paangira and Ek Cup Chai.

The jury for this selection consisted of renowned national critics as well as international film critics from countries like France, Germany etc. So the honours meant recognition and applause at an international level. The whole team of Natarang is surely most excited about these new feathers in its cap as this is no mean achievement.

The honours are not just for Natarang but for all lovers of Marathi cinema who have whole-heartedly supported it through houseful theatres all across Maharashtra and much needed appreciation. And as this is just the beginning of Natarang's march towards international success, we must say that it is surely marching the right way towards world glory.