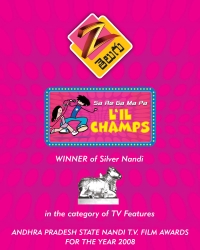 Zee Telugu has recently been bestowed by the AP State Nandi TV Film awards for the year 2008. This award comes for the channels much acclaimed reality show Sa Re Ga Ma Pa Little Champs 2008. Recognizing this achievement, the channel will be awarded Silver Nandi in TV Features Category.

This is the first time ever that the channel will be a recipient of this award. The Nandi Awards are prestigious yearly awards announced by the Government of Andhra Pradesh for outstanding performances in cinema and television.

Speaking on this achievement the Zee Telugu Programming Head Vamseedhar said, “We feel honored and also it's increased our responsibility in making quality programs.”

The date of the award presentation ceremony is yet to be announced.