A thrilling August on ZEE5 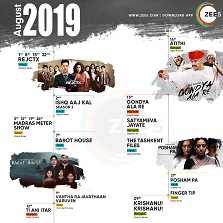 The month commences with new episodes of Goldie Behl's RejctX a show starring Sumeet Vyas and Kubbra Sait alongside 7 promising debutants. The platform will infuse a weekly dose of teen drama by releasing only 2 episodes every week, this month.

Similarly, the new Tamil Original -Madras Meter Show will also have one episode releasing every week which would be an amalgamation of information, entertainment and glamour with celebrities gracing the show every week.

Pushing the envelope further in the first week itself, audiences will be treated with the second season of the Ishq Aaj Kal which is first of its kind, digital spin-off of popular TV show Ishq Subhan Allah.

The Independence Day weekend will be a treat for the Bengali audiences with the world digital premiere of the superhit film Atithi releasing on 14th August followed by a Bengali Original Satyameva Jayate premiering on 15th August.

In addition, 15th August will also be marked by two additional releases namely a Marathi Original Gondya Ala Re and the world digital premiere of The Tashkent Files.