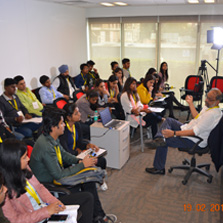 Mr. Aditya Seth, a Mumbai-based ace documentary filmmaker, mesmerised 35 students from six institutions of Delhi with his insightful input at the Noida premises of Zee Institute of Media Arts (ZIMA) on Sunday, February 19. He was conducting a Documentary Filmmaking Workshop, the second in the ZIMA workshop series.


Mr. Seth started his career in 1987 as an assistant director to Prakash Jha, and as a  film-maker he considers himself as a disciple of the Prakash Jha school of film-making. His documentary Bahadur: The Accidental Brave (2011), made on the subject of Nepalese labour migration to Mumbai, won the award for the Best Documentary at the 2nd Dada Saheb Phalke Film Festival in 2012, and the Best Feature Film (Non-Fiction) Award at the Indian Independent Film Festival in 2013.


During the workshop, Mr. Seth showed the students his latest documentary Are They Better Off, which explores the matrilineal society of Meghalaya. The documentary focuses on Meghalayan values of rejoicing at the birth of a girl. While taking the workshop participants through his journey of filmmaking, he explained to them the importance of choosing the subject for a documentary.


Mr. Seth asked the budding filmmakers to concentrate on three things i.e. the Subject, the Research and the Perspective. "Evolution is all about the natural selection", he further added. He cleared the doubts of participants, and cautioned them to be prepared to take up the challenges of documentary filmmaking.


Dr. Ambrish Saxena, Academic Head, ZIMA and ZICA, expressed his gratitude to Mr. Seth for sparing valuable time from his hectic schedule and conducting this workshop. Ms. Deepa Zutshi, senior faculty, apprised everybody of the activities of ZIMA while Ms. Lakhvinder Kaur, Counsellor, welcomed Dr. Kishore. Mr. Seth also gave away certificates to the participants of the workshop.