Arth- A Culture Fest ended on a high note with intriguing conversations, and exciting performances in Kolkata 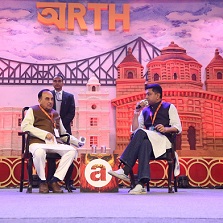 The second edition of Arth, Powered by Mongia Steel and Special Partner Dear Lottery, one of the most diverse, enriching, and engaging cultural fests in India by ZEE, culminated successfully today in the City of Joy - Kolkata. The two-day festival celebrated the rich culture, and heritage of West Bengal with insightful panel discussions, energetic performances, engaging workshops, and an extensive food flea.

Day 1 of the festival saw some enthralling panel-discussions and talks by the most prominent speakers in India. The event started with Lamp lighting followed a tête-a-tête with Prosenjit Chatterjee, and Sharmistha Goswami Chatterjee; followed by a panel discussions on The City As A Muse: Kolkata In Popular Culture Bickram Ghosh, Kunal Basu, Pradeep Sarkar, Supriya Newar, moderated by Sujoy Prosad Chatterjee; A Life Like No Other: Sonal Mansingh, in conversation with Vikram Sampath; The Future of CSR in India by Anuraag Saxena, and Gunwant Singh Mongia; Is History The New Battleground? by Amal Mukhopadhyay, Meenakshi Jain, moderated by Vikram Sampath; and Meri Fitrat Hai Mastana: A conversation on the poetry landscape in India by Manoj Muntashir, and Sundeep Bhutoria.

The festival also included soul-stirring performances by renowned Indian Rabindra sangeet artiste Jayatri Chakraborty, a dance performance on Amritasya Putra by Mamata Shankar Dance Company who blew away the audience with her mesmerizing performance, and the headline act on Day 1 was Bickram Ghosh, and Usha Uthup who enthralled the viewers. Performances on Day 2 included Baul Gaan by Goutam Das Baul, a magnificent Chhow performance by Tarapada Rajak, and a magical musical headline act by Euphoria!

The two-day-long cultural fest – Arth turned out to be a triumph event. Speaking on the success of the festival, Shreyasi Goenka, Founder & Director Arth said, “In the city of Kolkata, where cultural activities often reach a new dimension each coming year, 2020 started on a great note with the second edition of Arth, the most profoundly stimulating art and culture festival of India. I am delighted by the passion & love received by the audiences. I would like to thank my team for their tremendous support in putting up such a large scale event which is so close to our hearts.”

Dr Vikram Sampath, Festival Director, Arth, said, “The audience of Kolkata has been amazing as always. The appreciation and love from almost everyone has been overwhelming and humbling. We thank the audience in Kolkata and assure them of our best, every time.”

Swaroop Banerjee, COO and Business Head, ZEE LIVE said, “We believe every journey has an auspicious start point, for Arth it is Kolkata. For the second edition of India's first multi-regional culture festival we celebrated the literary and artistic fabric of this city, its history politics and films, its crafts, food and folk performances. I am humbled by the thousands that came to visit Arth - A Culture Fest on the weekend, I thank all our speakers, performers and partners for helping us put this larger than life festival of culture.”

Economist Subramanian Swamy said, “1920 was our first republic day, and today, after 69 years, we have remained a democratic country. On this Republic Day, all Indians should take pride in what we have achieved. Today, India is the 3rd largest GDP country in the world. We also have the 3rd largest army in the world which makes us a powerful country. We have a very large young generation who are the future of India, and we hope in the next 50 years, India is amongst one of the developed countries in the world.”

Talking about Arth, he said, “I am glad that ZEE is organizing this annual cultural festival. Arth is indeed a multi-dimensional effort that explains difficult subjects in simpler terms for the people to understand. I am very happy to be part of this event and speak about my definition of secularism.”

Babul Supriyo said, “Arth is all about diversity. It's the complexity, yet simplicity of the festival which makes it so beautiful. I am glad to be part of this event where there are so many prominent speakers expressing their views.”

Kakoli Ghosh Dastidar said, “Arth is a platform for people to come together to learn, understand, and discuss the art, history, culture, of India. I totally enjoyed my panel discussion at the festival today.”

Ram Madhav said, “The festival is an attempt to bring together people from across backgrounds and unite them together with our culture through various panel discussions and performances. I am glad to participate in this festival.

Palash Sen said, “My association with Arth is Euphoric, primarily because it's a cultural festival. As the tagline says, the festival aims to Rediscover, Reconnect with and Revisit and that's what Euphoria is also all about. People are rediscovering us even 21 years later and are revisiting and reconnecting with our music. I am excited as Arth is happening in my favourite city, Kolkata. It's a city that has given me my identity that I will always be proud about.”