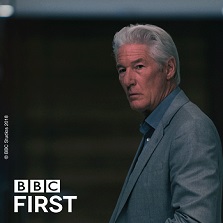 If you are expecting the everyday decorum that an elegant media dynasty story has to offer, think again. Beneath the steely performance of Richard Gere marking his much-awaited return on television after 30 years, MotherFatherSon offers twists and turns with a quirky sense of glee. The drama revolves around Max, who is at the helm of a mammoth media empire and his son Caden who is seen crumbling under pressure. Tensions are rife in this not-so-conventional story as Caden knows secrets that could bring Max's empire crashing down. This is a fight for family, a fight for truth – a fight for the heart of the nation.

Watch MotherFatherSon only on Zee Café from 16th August at 10 PM.
Highlights of the show:
About BBC First on Zee Café:

Contemporary and captivating, the BBC First dramas come in all hues and shades. With IMDB 7+ ratings, each of these stories unravel the hidden truths, stir strong emotions, cross boundaries and break rules, as they bring to life the riveting drama they breathe. Bringing the world of these seductively complex dramas are the most celebrated actors such as Benedict Cumberbatch, Richard Gere, Nawazuddin Siddiqui and Olivia Colman; Zee Café launches the third season of BBC First weeknights at 10PM.