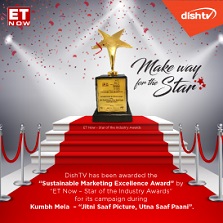 Dish TV India Limited, the pioneer and leading DTH operator in India has been awarded the prestigious 'ET NOW – Star of the Industry Awards' under 'Sustainable Marketing Excellence' category for its innovative portrayal of 'clear picture' during Kumbh Mela 2019 for its DishTV brand. With an attempt to increase brand salience by highlighting DishTV's HD proposition of 5X picture clarity, the campaign 'Jitni Saaf Picture, Utna Saaf Paani' during the Kumbh mela, was successful in spreading the message to thousands of pilgrims.

Keeping in mind the possibility of high pollution levels at one of the largest religious gatherings in the world held at Prayagraj and how adversely it could affect the pilgrims, the brand decided to provide clean and clear drinking water for pilgrims, but with a twist. Taking forward their proposition of 5X HD picture clarity, the company designed special bottles with in-built filters that make water from the river safe for consumption. In order to make the connection clear to the users, these branded filter water bottles were distributed to hundreds of visitors across the mela by DishTV's volunteers who also gave live demos of how to use the filter water bottles. The water bottles became part of the age-old ritual of drinking water from the holy Ganges.

Additionally, the brand had also designed special t-shirts and banners on ground in partnership with Enormous Brands to drive its core proposition. As a result, people had safe, clear water to drink and crystal clear understanding of DishTV's USP in the mind of consumers. This helped the brand to increase brand salience with the masses across all social media platforms.

The campaign received 7.53 million digital impressions and had an organic reach of 94K, and reached thousands of pilgrims.

Report By: Surbhi Shukla
Mail your feedback at: esselnewsletter@zee.esselgroup.com