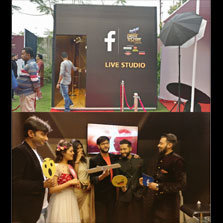 For the first time in the history of entertainment in Eastern India, Facebook forged an association with the Signature Awards Ceremony of Zee Bangla, 'Sonar Sansar'.

There was a Facebook Live Studio on the sets of 'Sonar Sansar', from where came a steady stream of show-stopping moments, celebrity bytes, behind the scenes footage and a whole lot of exclusive content, making the event an enduring success.

Celebrities like Mika Singh, Prosenjit Chatterjee, Dev, Akriti Kakkar, Jisshu & Ankush came to the Facebook Live Studio, and spoke their hearts out about a range of topics, indulged in a rapid-fire session, and spoke about their association with Zee Bangla. The amount of fun they were having during the interactive session will be reflected on the viewers as well, as they get a glimpse into the lives of the stars they love. The interactions were conducted by our very own Dipu (from Apur Sansar) aka Sourav Das.

Zee Bangla is proud to be associated with the Facebook India Team, the same team who handles the Filmfare Awards, Mirchi Music Award etc. across India, for this landmark occasion in the Bengali Entertainment Industry.
Catch the telecast of Sonar Sansar on 5th March, 7pm onwards, only on Zee Bangla & Zee Bangla HD.

Report By: Rajib Dey
Mail your feedback at: esselnewsletter@zee.esselgroup.com