FLIX FIRST SCREENING: &flix brings to you the first ever Multi-Lingual, Multi-City screening of VENOM, before it's theatrical release in collaboration with &pictures, Zee Cinemalu & Zee Tamil 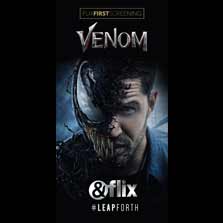 Staying true to its proposition, 'Leap Forth', &flix, the newest destination for Hollywood hits had a one-of-its-kind multi-city and multi-language special screening of Venom under its 'Flix First Screening' on 4th October 2018.

Based on the popular Spider-Man spinoff character, Venom is an action-packed film with wild alien effects and is also one of the most anticipated movies in 2018. Directed by Ruben Fleischer (Zombieland) and set to hit theaters on 5th October, Venom will feature Mad Max: Fury Road and The Dark Knight Rises star Tom Hardy as Eddie Brock, a journalist who becomes the host of a powerful, symbiotic alien that gives him superhuman abilities. The movie's supporting cast members include Michelle Williams, Riz Ahmed, Jenny Slate, and Woody Harrelson.

&flix being the official broadcaster for Venom planned a multilingual Indian television premiere with the network support of &pictures in Hindi, Zee Cinemalu in Telugu and Zee Tamil in Tamil. To ensure &flix's audience gets a chance to watch one of the most awaited movie of the year before it is open for public, the channel hosted exclusive preview screenings across the length and breadth of the country. These special premieres were organized in cities of Mumbai, Delhi, Gurugram, Bengaluru, Chennai and Hyderabad ensuring viewers from different cities enjoy the cinematic experience in their languages.


With innovative engagements ranging from unique half venom- half mirror invites for select set of influencers and media representatives, innovative/eye-catching tickets giving an impression of a snake bite, instant venom photo booths at the screening supported by robust on-air and digital promotions, audiences had an exclusive opportunity to leap forth to the world of MARVEL in true &flix way. &flix also hosted internal engagements within the ZEEL group to ensure awareness and participation.

Report By: Neha Bhandari
Mail your feedback at: esselnewsletter@zee.esselgroup.com