From Kalki Koechlin to Rajkummar Rao, ZEE5's September line-up will keep you hooked 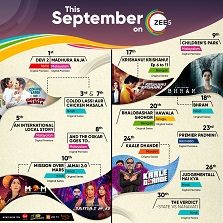 ZEE5, India's fastest growing OTT platform has an exciting September planned for viewers. From Original shows to blockbuster movies across languages, there is something for everyone.

The month kick-starts with the World Digital Premiere of Prabhudeva and Tamannaah's popular Tamil film, Devi 2.

The month will end on a high note marking the digital premiere of the much talked about Judgementall Hai Kya starring Rajkummar Rao and Kangana Ranaut on 26th September and an original series, The Verdict starring Manav Kaul, Angad Bedi, Sumeet Vyas and Angad Bedi on 30th September.