"I switch my phone off at 9.30PM, whenever my children and husband are at home,'' Farah Khan on Not Just Supper Stars 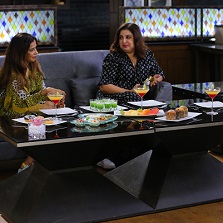 One of the most entertaining persons in the industry, a super talented film-maker and choreographer Farah Khan is all set to make an appearance on the latest episode of Not Just Supper Stars on Zee Café, available as part of Zee Prime English Pack. This is your chance to get the inside scoop as she shares nuggets about her journey in the industry with host Gunjan Utreja. Joining Farah on the show for the first time ever is her friend and celebrity hair stylist, Kanta Motwani.

Speaking about her experience as she dabbles the dual role of a choreographer and film-maker, Farah Khan says, “Directing a film has been more challenging because of the process. One must not only build everything from scratch, but also bring it alive. Choreographing a song is much easier as it's like a 5-minute film with actors and lyrics. The song is readily available, and your scene is also set.”

The episode sees Gunjan Utreja and Farah Khan in conversation about her career. She quotes, ”A lot of research goes behind choregraphing a song. Basis the requirement of the scene, we pick up steps from various dance forms. I prefer visiting musicals, catch some local dance performances that help in gaining inspiration to do justice to the song and the scene.”

When asked about her relationship with her kids, she says, “Our holidays have always been about spending extensive time with my kids which is my most favourite part. We usually have at least 3 holidays a year and when work takes over, the come and pay visit on my set.”

While Farah revealed nuggets from her personal and professional journey, her friend Kanta joined the party with some interesting bits to share. Speaking about their 20-year long friendship, Kanta jokingly revealed how Farah and her family are almost entirely responsible for taking care of Kanta's domestic bills. Speaking about Farah, she says, “She lights up the whole place. She is never in a bad mood.”

Talking about how the salon is her go-to place, Farah says, “I love going to the parlour. It's my social place. I'll bump into Shilpa Shetty, Sonali Bendre Shweta Bachchan, Madhuri Dixit, Kriti Sanon and sometimes even my mother.” She goes on to say, “I live in Kanta's parlour more than I live in my own house. I know the names of everybody from the boy who serves tea, to the colourist. That really is proof that you've been going there a long time.”

When asked if they ever call each other at odd hours for random requests Farah retorts, “All my friends know that at 9.30 PM my phone is put off, whenever my children and husband are at home.”

To know more about Farah's love for food, her embarrassing dancing videos and her opinion on exercising watch the latest episode of Not Just Supper Stars.

Watch your favourite celebrity unwind and spill out personal titbits on Not Just Supper Stars every Sunday at 10 PM and Reruns on Friday 11 PM only on Zee Café!