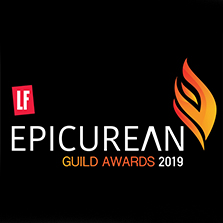 The foundation of the Living Foodz Epicurean Guild Awards (LFEGA), built on unparalleled credibility, is what gives stimulus to it. The LFEGA stems from people who have been associated with a reputed channel, a renowned Chef and jury members who have made a name for themselves in the industry they represent. The third edition of LFEGA brings with it a celebration of taste, innovation and the people behind it all! The 2019 edition of LFEGA sees new categories, a pan-India approach and a celebration of individuals. It honors the names that have retained a place for themselves over the years whilst recognizing the new.

With a vision to honor the best of food in India LFEGA celebrates India's culinary diversity. LFEGA, while curated by the LF, has been co-curated by the distinguished Chef Manu Chandra whose name needs no introduction. He is synonymous with the word innovation and with being the game-changer when it comes to presenting the country with great food with passion.

For 2019 nominations were divided into 20 categories. The 'Cuisines' include Traditional Indian, Progressive Indian, Emerging Indian, Seafood, Chinese, Multi-Asian Cuisine and Italian. The 'Experiences' include Nightlife, Best Indian Wine, Best Indian Craft Beer, New Restaurant of the year, The Oyster Club, Most Inclusive F&B Establishment, Most Innovative Restaurant Concept and Iconic Restaurant and the 'Individuals' category includes Lifetime Achievement Award, Chef of the Year, The Changemaker, Food Entertainer and the Best Food Instagrammer. The audience is an integral part of the entire process which is why LF along with public votes will decide the winners of the categories - "Food Instagrammer of the year" and "Food Entertainer of the year".

Manu Chandra, Co-Creator, LFEGA says, "Being closely associated with the industry has made me appreciate everything it has to offer. Recognition to those who it is due is an integral part of their as well as the industry's journey. This is what LFEGA is all about and I am happy to be associated with a platform that respects the innovators and everything they bring to how society functions daily."

"I am looking forward to this spectacular evening that will witness some of the top individuals and restaurants in India competing to be the game changers of the year. Curating this experience with Manu Chandra along with our talented jury members has been truly inspiring. Our aim is to identify venues that are striving towards bringing a notable change in the culinary space whether on a large or small scale”, explains Amit Nair, Business Head at LF.

Staying true to its course, LFEGA follows a nomination and selection process that is transparent and rigorous. After shortlisting restaurants across various categories that drive the modern F&B space, an eminent jury comprising influencers, food critics, and gastronomes nominate and elect the top contenders for each category. Following this, the jury dines out at these restaurants, anonymously-a hallmark of LFEGA.