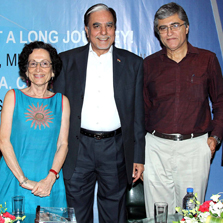 Mr. Subhash Chandra, Chairman, ZEE was felicitated by the Press Club, Mumbai to commemorate the completion of 20 years of ZEE and Private Satellite Television in India.

The event opened with a welcome note by Mr. Gurbir Singh, President, Press Club. In his note, Mr. Singh spoke about Mr. Subhash Chandra's pioneering vision which led to the establishment of new industry in itself. The note was followed by the felicitation ceremony, where eminent Columnist & Writer - Ms. Bachi Karkaria and Mr. Sanjay Pugalia, Editor-in-Chief, CNBC Awaaz felicitated our Chairman.

While delivering his keynote to the media journalists, Chairman spoke about his journey of 20 years and the challenges faced during the initial days. He also commented on the benefits which the industry stands to gain on the influx of digitization. Speaking further, Chairman said, “With the advent of digitization the media industry would experience a lot of structural changes. Once these changes are ironed out, the industry would grow 3 times in the next five to seven years.”

Chairman also commented on the print industry, saying that it would grow and sustain for the coming 10 – 15 years, since the reach of the newspapers is merely 20 % of the entire population of India.

The keynote was followed by an insightful and engaging panel discussion on "Media at Crossroads" which covered the concerns and issues and future outlook for the media industry. The event concluded with an interactive question and answer session.

Report by: Team - Corporate Brand
Mail your feedback on this article to: esselnewsletter@zeenetwork.com