Revel in the glory as &flix brings the Flix First Premiere of 'The Marine 6: Close Quarters' and a special Republic Day Binge 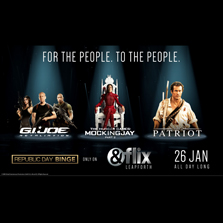 This Republic Day, it's time to meet Hollywood's biggest heroes as they stand tall in the face of adversity and inspire you to achieve greatness! Come Sunday, January 26, 2019, &flix, the destination for the biggest Hollywood hits, is set to bring the Flix First Premiere of the action-adventure hit franchise - The Marine 6: Close Quarters. Engage in a night of adrenaline boost with your friends and family as this time, the stakes are high! Directed by James Nunn, the film promises to keep you on the edge of your seat, premiering on Sunday, January 26, 2019, at 1PM and 9PM.

Available with the Zee Prime English Pack, the channel also adds to the excitement with a special day-long 'Republic Day Binge' for those who seek sheer adventure. #LeapForth into a world where they biggest heroes of Hollywood fight all odds with movies such as Captain America: The Winter Soldier, Captain America: Civil War, Iron Man 3, Hunger Games: The Mockingjay Part II, and The Patriot among others.

A bunch of nasty international criminals, two former marines and a young girl's life at risk – that's 'The Marine 6: Close Quarters' for you. WWE superstar The Miz as Jake Carter and director James Nunn team up for the sixth time as they end the series with a bang. This time the WWE superstar is seen on screen with yet another big name in the same sport Shawn Michaels as Luke Trapper. Watch as they stumble across a terrorist in a disused Orgeoan brewery and witness a kidnapping of a little girl. As the movie continues, viewers get to see the ups and downs in elaborate action sequences between the two sides in one exhilarating culmination. The power-packed motion picture is sure to bring excitement and action to the next level.

Bringing some of the choicest World Television Premieres in the language of your choice, prized dramas, international news and lifestyle content for the Indian viewers, the unique bouquet – Zee Prime English Pack - comprising &flix, Zee Café, LF and Wion, is priced at an attractive Rs. 15/- per month.

When a little girl's life is on the line how far will the former Marines go to rescue her?

Catch the Flix First Premiere of The Marine 6: Close Quarters this Sunday, January 26, 2019 at 1PM and 9PM.
Report By: Shruti Barot
Mail your feedback at: esselnewsletter@zee.esselgroup.com