Sourav Ganguly is Back with a Brand-New Season of Dadagiri 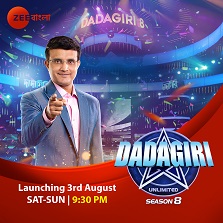 India's very own Sourav Ganguly, a.k.a. Dada, is all set to make a comeback on the small screen with Dadagiri Season 8, to be launched on 3rd August, only on Zee Bangla.

Ever since its inception in 2009, Dadagiri has carved a niche for itself by setting trends in the television space and opened new horizons of entertainment for the discerning Bangla audience. Hosted by Sourav Ganguly, Dadagiri is a one-of-its-kind show that celebrates human spirit and social responsibility, making it a brand in itself, which the Bengali TV audience swear by.

Contestants hailing from various walks of life, who in some way or the other have contributed to the society, are welcomed in the show and their stories heard by the entire world, inspiring others to come forward and take steps in propelling positive change in the world. Contestants profiles in the new season will range from daily wage earners and fishermen to school teachers and celebrities… The common thread connecting them being all the small steps they have taken to bring about great changes in the society, making the world a better place.

This also rightly sums up the central theme of Dadagiri Season 8 - “Din Bodoler Dadagiri”. The effort is not only to make these stories to known to everyone, but to inspire every single audience to come forth and do whatever little is possible in their capacity to propel positive change in the world.
Dadagiri Season 8 also promises more entertainment with new and refreshed rounds of game. Also boasting of a new “Captain's Squad”, it presents an opportunity to the common people for joining hands with Dada and ask questions to the participants. The “Captain's Squad” will also be like a helpline, which the participants can seek help from in the final round.
Loaded with many more attractions, Dadagiri Season 8 launches on 3rd August, 2019. Catch the action every Sat & Sun, at 9.30 only on Zee Bangla.

Report By: ZB Marketing
Mail your feedback at: esselnewsletter@zee.esselgroup.com