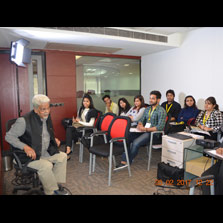 Mr. Subhash Chaturvedi, veteran scriptwriter from Mumbai, unveiled the nuances of narrative while writing script for fiction, at ZIMA Noida on February 25. He was imparting instructions to young students who had joined the Script writing - Film Workshop for learning the art of storytelling.


Mr. Chaturvedi, a veteran in scriptwriting, covered the basics of scripting in a bid to impart the skills of writing a good script for fiction covering both film and television. The workshop encompassed a wide spectrum of entertainment formats, right from docu-drama, TV drama and TV serials to short fiction films and feature films.


During his long career, Mr. Chaturvedi has written a number of TV serials including Darshal (Zee TV), I Love My India (Star TV) and Pehli Mulaqat (SONY TV). The favourite genre of Mr. Chaturvedi is Humour and Satire. The Hindi Play 420 Minutes, written by him has received an award from Maharashtra Government. It has also been telecast on Doordarshan.


Dr. Ambrish Saxena, Academic Head of ZIMA and ZICA, said that the endeavour of ZIMA is to refine the skills of talented lot, and the Script Writing - Film Workshop was an effort in that direction. Deepa Zutshi, senior faculty, ZIMA, told the workshop participants what all avenues are available at ZIMA for the artistically gifted students.


Ms. Lakhvinder Kaur, expressed gratitude to Mr. Chaturvedi for conducting such an involving workshop. In the end, Mr. Chaturvedi gave away certificates to the participants.