The Tiger's Closer Than You Think! 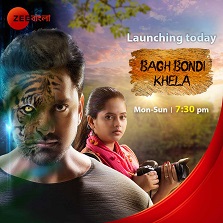 Life in a small town is very simple, where everyone knows each other, where there exists a strong sense of community, where people believe in peaceful co-existence. Such is a life that Raya too leads.  Played by Ishani Das, she is the typical girl-next-door, simple, brimming with life and a passionate wildlife photographer.

One the other hand is the city-bred Siddhartha. Played by Rubel Das, 'Dance Bangla Dance' and 'Bhanimotir Khel' fame, Siddhartha is born and brought up in the urban jungle and is characteristically very different from Raya. Yet somehow, Raya and Siddhartha have found love in each other. Siddhartha wants to tie the knot, knowing little that a curse haunts Raya's family for generations, which forbids the women in Raya family from getting married. Apprehensive of the looming bad luck and misfortune, Raya refuses to marry Siddhartha, despite being in love him. However, Siddhartha is adamant. City life has taught him not to believe in superstitions and curses mean nothing to him. He sways Raya, who finally relents into marrying him.

Just while the happy couple seems to be settling for life, larger forces come at play, unbeknownst to them. Shortly after their marriage, Raya and Siddhartha visit the Sunderbans for an adventure photography tour. The young couple is daring and brave, and they venture into a forbidden corner of the forest in the hopes of catching a glimpse of the famed Royal Bengal Tiger, and is cursed by the local priest. Raya now must spend her life with a tiger. Does it mean Siddhartha will transform into the mighty predator? Is there a way she can save Siddhartha from this curse? Will she be able to evade this curse and help rewrite their lives in a new rhythm? Questions are many, and answers not known.

Produced by SVF Entertainment Pvt. Ltd, the name behind chartbuster shows like Trinayani, Bhootu and Goyenda Ginni, 'Bagh Bondi Khela' showcases the magical Sunderbans with extensive shoots being cantered there, capturing the bone-chilling thrill and excitement of a man turning into a tiger thanks to top-notch VFX support, and last but not the least, tests Raya's determination to help her husband overcome a curse that has haunted her family for generations and break it once and for all.

Be a part of Raya's quest and get ready to experience the unexpected, with 'Bagh Bondi Khela' from 6th January onwards, Monday to Sunday at 7:30 PM, only on Zee Bangla.