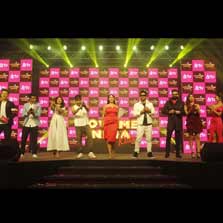 Music is often said to be literature of the heart, it's what speaks when words fail. Giving the reign to millions across the nation to choose India's young singing sensation will be &TV's first ever live singing reality show for kids, Love Me India. Developed by Essel Vision Productions, the concept will revolutionize the current reality show space as the format gives the people of India the highest voting power. Opening the live battlefield amongst kids aged 5-15 years, the show will bring forth talent from different zones of India – North, South, East and West. With 48 young contestants vying to win audiences hearts through their singing talent, Love Me India will went live on 22nd September 2018, and airs every Saturday and Sunday at 9:00 pm only on &TV.

Joining India in the voting process and helping them choose their singing megastar will be three musical maestros. Making their debut in the judging territory will be the High Rated Gabru, Guru Randhawa with elegant and soulful singer, Neha Bhasin. The industry's favorite judge with over 700 blockbuster songs and the biggest live shows worldwide to his credit; actor, singer, composer, India's superhit machine Himesh Reshammiya will also be seen joining the judging panel. Each of the four zones will be led by a captain who will play the role of a guide and mentor, teaching and motivating these young singers and further nurturing their talent. Leading the West zone with full force will be Maharashtra's favorite, Abhijeet Sawant, while the Gulabo singer Anusha Mani will reign over the South zone. Spreading her charm and leading the talent of the East zone will be Bhoomi Trivedi of Ram-Leela fame, along with actor, singer and pride of Punjab, Navraj Hans who will be seen taking control over the North zone. Returning to the reality stage owing to his passion for music and love for anchoring will be the versatile, Meiyang Chang along with the stunning, Sunanda Wong.


Putting the spotlight on India's novice singers, Love Me India began a unique audition process providing the nation with the power to select the best out of the lot. Along with digitally scanning the talent of 80 contestants on the Zee5 portal, viewers also got a glimpse of these magical voices through live concerts held across the four zones of India. Crooning to some of the hit songs, the top 20 from each zone along with their respective zonal captains left the audience in awe, giving them a flavour of the entertainment that lies ahead. Enhancing the current audience engagement process followed across the reality show arena, Love Me India will provide its viewers with the chance to vote live for their favorite singer by logging on to the Zee5 app.


Commenting upon the launch of this unique concept, Vishnu Shankar, Head, &TV said, “Love Me India aptly embodies &TV's brand ideology of 'Hai Khaas Har Andaaz'. In a first of its kind move, the reality show for kids shifts the power to the people, giving them the right to choose their singing superstar from the audition phase itself. With this interactive format, we are redefining the way of engaging with both content and consumer, taking it to the next level.”


Elaborating further on the format and thought behind the show Shariq Patel, CEO Essel Vision Productions said, “With Love Me India we have turned the tables to involve the people of the country in the voting process and a part of choosing the winner, coupled with the excitement of interacting in the live format. The show brings together extremely talented singers, kids chosen from all over India who are chasing their music dream. We along with &TV are happy to present this new offering to the viewers and hope they will enjoy the show.”

Thrilled on making his debut with a reality show, contemporary pop singer Guru Randhawa said, “With the extensive reach the medium of television enjoys, I have always believed that it has an immense scope to transform lives, give direction and change perception. I am grateful to &TV's Love Me India for giving me an opportunity to step into the world of television. This also marks my entry as a judge on the reality show for kids and I look forward to witnessing talent that share the same passion, love and zeal for music like I do. I am extremely excited to join hands with the people of India to find our youngest, yet biggest singing superstar.”

Adding on to his excitement the melodious singer Neha Bhasin said, “Having participated in a reality show before entering the music industry, I feel like I'm entering familiar territory with Love Me India. I have experienced the nervousness of being on the other side of the stage and hence my style of judging would be different from the others. The concept of the show gives the 48 contestants across four zones direct access to the hearts of millions, and as a judge we have to ensure that they use this opportunity to the fullest.”

Having won several hearts with some of his biggest Bollywood hits, the multitalented playback singer, music composer turned actor and film producer Himesh Reshammiya said, “Celebrating singing talent through such a phenomenal concept will be an honor. Like always, my focus will be on nurturing the talent and owing to the live format, the contestants will need our support more than ever. The confidence and the scale of the talent these young kids have is admirable. I'm sure they are going to prove themselves to be the biggest singing stars of India. Every Indian who will tune in to this show will also have a huge responsibility on their shoulders that I'm positive they will fulfill well. I'm certain that this journey of winning hearts will be an incredible one and I'm excited to get started.”

Go live with Love Me India every Saturday and Sunday at 9:00 pm only on &TV.

Report By: Karishma Desai
Mail your feedback at: esselnewsletter@zee.esselgroup.com