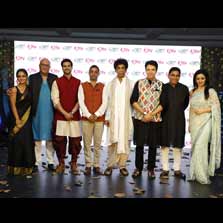 The magical and mysterious tales of the courageous King Vikram and the fascinating spirit Betaal, transported the audience to an enchanting world and etched a special place in the hearts of people many years ago. &TV is all set to bring alive this tale in a larger-than-life avatar, giving the fabled narratives a contemporary take through its new epic fantasy Vikram Betaal Ki Rahsya Gaatha. Depicting the tussle between good and evil, the show will take viewers through the quest of the intelligent King Vikramaditya to find the wise ghost Betaal as challenged by the evil Bhadrakaal. On the other hand, the wily Betaal has identified that it is only brave King Vikramaditya who can cause the downfall of the dark Bhadrakaal.

Engaging in this battle of brain and brawn, popular television actor Ahem Sharrma will be seen essaying the role of the righteous King Vikramaditya. The versatile theatre and film actor, Makarand Deshpande steps into the shoes of the witty Betaal, while the powerful character of Bhadrakaal will be played by veteran actor, Sooraj Thapar. The show brings together a strong ensemble cast including names like Ishita Ganguly, Amit Behl, Sonia Singh amongst others. It is slated to go on air on 16th October 2018, every Monday - Friday at 8:00 pm only on &TV.

Artistically portraying Vikram's several futile attempts to bind the free spirit's tail to himself, Vikram Betaal Ki Rahsya Gaatha showcases the challenges faced by the King while choosing between right and wrong. Through captivating illustrations, it will also bring forth the untold story between Betaal and Bhadrakaal and the repercussions of their starkly opposite ideologies. With each character having a magnificent and strong appearance, the show will take viewers through the three contrasting worlds of Vikram, Betaal and Bhadrakaal, while also offering a vital life lesson at the end of each episode. Peninsula Pictures, headed by Alind Srivastava and Nissar Parvez along with Writer and Creative Producer of the show, C. L. Saini are the creative minds behind this epic fantasy.

Commenting on the new fiction offering, Vishnu Shankar, Head, &TV said, “Vikram Betaal Ki Rahasya Gaatha is one of our most ambitious projects and we are proud to present it on such a majestic scale. It's also one of the first few shows to launch right after the break of our new brand campaign 'Hai Khaas Har Andaaz' and takes forward the ideology. At the heart of the show is an effort to convey gems from Indian culture and traditional knowledge to the society and families in an entertaining manner suitable to today's time. We are sure it will revive childhood memories of the evergreen tales of Vikram and Betaal, adding a hint of nostalgia yet giving the new generation a chance to live this epic fantasy and gain some valuable lessons. Apart from the grandeur involved in the show, the characters have been mounted on a huge canvas and audiences can expect nothing short of a visual spectacle.”

Talking about the show, producers Alind Srivastava and Nissar Parvez, Peninsula Pictures said, “While a small segment of the Indian audience might have seen the stories of Vikram and Betaal, a large part of them have not even heard about the characters or the stories depicted in these tales. Vikram Betaal ki Rahsya Gatha will not only attempt to bring forth several stories that have been lost in time but will also concentrate on the real and untold stories of Vikram, Betaal and the infamous character, Bhadrakal. With a modern look and feel to support these characters, the story further delves into the making of King Vikramaditya and his journey to be the royal and poised King that he is. The essence of these timeless classics remains the same, but the characters and stories have a younger and edgier vibe to them which is sure to appeal to the younger audience as well.”

Returning to television after 20 long years is acclaimed theatre artist, director and film actor, Makarand Deshpande, essaying the character of Betaal. He said, “I am looking forward to play Betaal in Vikram Betaal Ki Rahasya Gaatha. He is an intelligent and generous spirit who wishes to help humanity in any capacity. His clever and tactful way of throwing challenges at the great King Vikramaditya in the form of riddles showcases the wise and free-spirited side of him. Unlike the original character, the new Betaal is a friendly spirit that floats in the air and will have an ivory appearance. He has a misty tail for his legs that will wrap around King Vikramaditya's waist. The character is sure to appeal to the audience and I hope this new creation also works its magic, just like the previous rendition of Vikram and Betaal did.”

Adding to his excitement on playing the character of King Vikramaditya, the popular actor, Ahem Sharrma said, “I am very happy that I have the opportunity to play the character of King Vikramaditya in Vikram Betaal Ki Rahasya Gaatha. Vikramaditya's name itself reflects the strength and bravery of the King of Ujjain. Although he is praised by many for his intelligence and righteousness, he possessed an egoistic trait that compelled him to take up Bhadrakaal's challenge of capturing Betaal. It's this weakness of his that constantly finds him torn between choosing the good and evil. He has an authoritative aura surrounding him which has been proficiently incorporated in his modern-day look consisting of leather tunics, royal golden embroidery and fine jewellery complemented with a shining golden sword that reflects upon his opulent life. I am really enjoying portraying this powerful character and I hope that the audience love and appreciate this new version of the classic tale.”

Thrilled about essaying the grand and powerful character of Bhadrakaal, actor Sooraj Thapar said, “Until now Bhadrakaal was often just a character many had heard of, but for the first time the audience will see the character of Bhadrakaal prominently in Vikram Betaal Ki Rahasya Gaatha. His evil and cunning side is represented through his magnificent, dark and unusual avatar. Extremely sharp with his moves, Bhadrakaal has a manipulative charm which he often uses to his advantage to get what he wants. With an extreme power and control over the five elements of earth in his hand, he often finds ways to be a constant obstacle in Vikramaditya and Betaal's story. Bhadrakaal's dark world and tussle with Betaal is sure to add more intrigue to this epic show.”


Tune into the magnificent worlds of Vikram, Betaal and Bhadrakal from 16th October, every Monday to Friday at 8:00pm only on &TV.

Report By: Karishma Desai
Mail your feedback at: esselnewsletter@zee.esselgroup.com