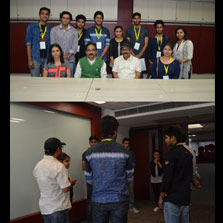 Every human being has the instinct for acting; the only thing required is a catalyst who can precipitate that impulse to the pleasant surprise of everybody around. Mr. Vibhanshu Vaibhav, eminent writer, director and actor from Mumbai, performed the role of a catalyst in the Acting Workshop organised at ZIMA Noida on March 8.

Students from different institutions of Delhi and NCR participated in the Acting Workshop which aimed at giving the actor inside a chance to come out of the shell. Mr. Vaibhav through various exercises made the participants realise that nothing remains out of bounds if there is a strong will.

The workshop covered the basics of acting across platforms, while addressing the issues of aptitude and attitude. Mr. Vaibhav told the participants about the use of body and movement in acting. He also worked on improving their diction and speech.


This was the sixth workshop in the day-long workshop series initiated by ZIMA Noida about a month ago. The earlier workshops were conducted on video production, documentary filmmaking, scriptwriting (News), scriptwriting (Film) and TV News Reporting.


Dr. Ambrish Saxena, Academic Head of ZIMA/ZICA, introduced the resource person during the opening session of the workshop. Ms. Deepa Zutshi, senior faculty, told the participants all about ZIMA and its activities while Ms. Lakhvinder Kaur, counsellor, expressed gratitude to everybody for the success of the workshop.


At the end of the workshop, the students were given participation certificates by Mr. Vibhanshu Vaibhav and Dr. Ambrish Saxena.