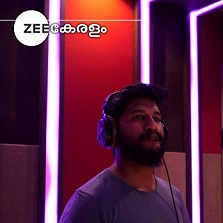 Zee Keralam is all geared up for its latest large scale fiction launch – Neeyum Njanum. Following the launch of the serial's promo a few weeks ago, ZEE Keralam roped in the versatile Vijay Yesudas and Anne Amie of the Kumbalangi Nights fame to sing the title song of the show. The song is on its way to becoming an instant hit after it released on the channel's Social Media handles.
With esteemed playback singers lending their voices for the title song, ZEE Keralam is determined to continue cementing its place in the hearts of the Malayali audience. Vijay Yesudas, son of the revered K.J Yesudas, has sung over 300 songs in different south Indian languages. He has also acted in few Tamil films. This is the first time that the singer is singing a song for a serial. Meanwhile, Anne Amie a trending talent in playback singing, has an active music career in the film industry for the past three years. Neeyum Njanum marks her debut in mini screen.

The song was programmed by Leo Tom and the poetic lyrics were penned by B.K. Harinarayanan, a prominent lyricist who has worked on songs like Jeevamshamayi and with top  music directors like Gopi Sundar, Shaan Rahman and Ranjin Raj.
Neeyum Njanum is a love story between a 45year old suave businessman Ravi Varman & a 20 year old vibrant Malayali girl Sreelakshmi.  It explores the concept that love can happen at unexpected moments and that age is not a limiting factor for two souls to come together.

Report By: Sukanya Suresh
Mail your feedback at: esselnewsletter@zee.esselgroup.com