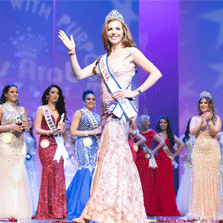 In a legendary ceremony sponsored by Zee Alwan and Zee Aflam USA, the Syrian, Inas Alawam was crowned Miss Arab USA 2018 by Baian Taleb (Miss Arab 2017) at the Chandler Center of the Arts in Arizona.

Ms. Alawam is a US citizen of Syrian origin. She holds a BA in Business Administration and a Master's degree in International Economics and Finance. She is fluent in Arabic and English. She was born in the city of Suwayda, located in southern Syria and spent ten years of her life in Saudi Arabia before immigrating to the United States in 2006.

The Miss Arab USA pageant is different from other pageants. It does not require body measurements and competitors do not wear swimsuits. Instead, the national costume is offered to each contestant. The selection of the judges was based on personality, style, public information, education, lifestyle, talent and personal abilities, as well as integration into community service.

"The pageant is a cultural charity event, aiming to crown a young Arab lady as an ambassador of goodwill, and to present the Arab women around the world with a goal to serve refugees, children, women, orphans, and the homeless. It also fosters the interdependence of the second generation of Arab American women and celebrates their Arab heritage and highlighting female Arab icons,” Mr. Ashraf Elgamal, the founder of Miss Arab USA, has confirmed that these goals have been achieved over the past years.