Zee Bangla Brings You Seemarekha, the Story of Sister Rivalry 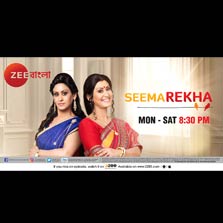 Zee Bangla's new launch 'SEEMAREKHA' is a metaphor of life as the name suggests. It shows the limitations of being selfish one hand and on the other it showcases the emotional sacrifices that breaks boundaries to weave happiness and well-being of the family.


Seema and Rekha the twin sisters have strikingly different nature. Seema grows up to be a self-centered individual whose sole interest in life is to win over and make the best of all situations, whether on the personal front or in regards to her career as a Criminal Lawyer. Rekha on the other hand grows up to be a pleasant, homely, considerate and sacrificing girl who takes care of her parents and family. Rekha remains the sibling overshadowed by her sister's accomplishments but never complains even of her mother's partiality towards the brighter child.


Seema eventually gets married to a successful businessman Sitangshu who is a sensible fellow with a strong belief in family values.

Seema, the mother of three children and the supposed homemaker of the joint family, is always disinterested in fulfilling her due responsibilities as she pursues her career.  Her husband Sitangshu, who is a successful and sensible man himself takes up the job and does his level best to save the family from falling apart.


On the other hand Rekha leads a miserable life with her lecherous alcoholic husband.

Eventually Rekha's husband leaves her and settles elsewhere. Rekha tries to support herself but at one point of time being incapable decides to come back to her hometown Kolkata.

On the day of Jagaddhatri puja Rekha comes to visit her sister's home and calls her brother in law Sitangshu. Sitangshu welcomes her warmly and tells her that as usual her twin sister Seema was not available at home to perform the due rituals of Jagadhatri puja. On his request Rekha performs the rituals instead of Seema. Seema who is away from home becomes furious and comes back home.

On becoming aware of Rekha's condition Sitangshu gets her married off to his brother Subhrangshu, who on the one hand is not so successful but also suffers from bipolar dis-order.

This clutter breaking storyline of Seemarekha portrays how two twin sisters having completely different natures get married to the two brothers and happen to live under the same roof. This is a wholesome family entertainer packed with romance, family drama, and thrilling situations. Indrani Haldar is making her comeback after the popular fiction show Goyenda Ginni. Badshah Moitra & Debdut Ghosh is also starring alongside Indrani. Produced by Surinder Films, Seemarekha launches on Oct 23rd, 8:30 pm, Monday- Saturday.

Report By: Rajib Dey
Mail your feedback at: esselnewsletter@zee.esselgroup.com