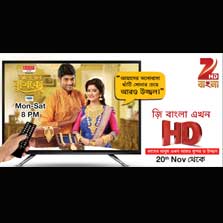 One of the most popular brands of ZEE, Zee Bangla now has its high-definition version with the launch of Zee Bangla HD from 20th November. Zee Bangla, was launched on September 15, 1999 as Alpha Bangla, the first Bengali satellite channel. It gradually became a quintessential part of every Bengali family carving an indelible niche for itself by showcasing the culture of Bengal to the world. A pioneer in having non-fictions every single day of the week, its fiction shows have also been appreciated time and again with increasing popularity. The way Zee Bangla has penetrated in Bengalees' lives; it aptly justifies their strap line, “Jibon Mane Zee Bangla”.

Now with HD, Zee Bangla promises to amplify the journey more. Brighter, better and shinier audio-visual content will give our target audience an enthralling experience. With the HD version, the loyal audience base of Zee Bangla is also expected to upgrade to HD, making it a success. This will also add a sense of status and zeal to the audience. Gradually, this upgradation will also help in assessing the channel's popularity.

Since it is an excellent opportunity to come even closer to our audience, a campaign was launched to make sure the communication is well-spread. “Kacher manush ekhon aro sundor o ujjol” (Your loved ones are now brighter and more beautiful). The campaign featured a few of the most popular protagonists, Parama from Goenda Ginni, Arjo and Diya from Deep Jwele Jai and Kohinoor and Jhumko from Jorowar Jhumko. Three special promos have been shot where, marrying the interesting story lines of these protagonists the promos were supported with copy that emphasizes on the amazing feeling of watching an HD channel. The on-air promotions have been run consecutively on peak hours.

To spread the message in a short span of time to as many people as possible, we took to the digital platform to boost the campaign. The campaign includes stills from the promo shoot and repeat posts of the promos. The campaign is going strong according to the latest reports. Not only that, celebrity bites of non-fiction show judges, other protagonists etc. are being run on social media resulting in a high rate of engagement.

The new journey now starts with a bang! On 21st Nov. one of the most popular serials Jorowar Jhumko will have a special episode on the occasion of Raash Poornima. An interesting turning-point in the story will reveal the fierce woman power in Jhumko taking the audience through a whirlwind of emotions. The blockbuster week continues with the Grand Finale of the ultimate entertainment platform, Dance Bangla Dance Junior 2016. The doyen of dance, Govinda has adorned the judges' panel as the special judge on that day and the audience is sure to get a visual treat when the Chote Miyaan hits the stage on 27th Nov. The celebration of launch of HD channel is not over yet. Because the power-packed, extravagant show, the biggest singing platform ever in television history, SaReGaMaPa will be back again from 28th Nov., with singing talents from all around the state and an elite panel of judges.

The grand set, sensational performances with the most popular host and celebrated actor Jishu Sengupta, SaReGaMaPa is all set to rule the TRP charts. Needless to say, this glorifying indulgence will be another delight for the HD subscribers.

All these programmes are being promoted highlighting the new HD logo on print, radio, television and digital. As the new HD channel kicks-off with a month-long promotion, it is bound to achieve the goals in the coming few months. An amplified HD experience with the near and dear ones looking brighter and better, Zee Bangla is entering into the most glorious phase ever.

Report By: Mallika Biswas
Mail your feedback at: esselnewsletter@zee.esselgroup.com