Zee Bangla to tell the story of a girl with special powers: launching 'Trinayani' on 4th March 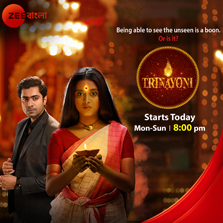 Everyone is unique in his or her own way! Everyone is blessed with some special ability, which, when put to best use can make the lives of people around them better. Zee Bangla believes in this, and each of the shows in its bouquet resonates just this belief.

'Trinayoni' is one such story, built around the central theme of our protagonist, Trinayoni, getting visions from the past and future! At first, she is weary of her extraordinary ability, unsure of how to channelize the power in favour of her family and the people around her, caught in the dichotomy of whether this is a blessing or curse. However, over time, she learns to make best use of her power, putting others before self and trying to save those around her from impending danger.

Trinayoni is symbolic of most women, the family's nurturer, who are almost always blessed with a strong sixth sense, channelizing this ability for the betterment of their families. True to Zee Bangla's resolve of 'Rewriting Life in a New Rhythm', 'Trinayoni' too intends to take this legacy forward by telling the story of an ordinary woman who would propel extraordinary change in her surroundings and bring about a brighter future.

Produced by Sree Venkatesh Films, and directed by Sayan Dasgupta, the fascinating tale of 'Trinayoni' will hit the small screen from 4th March, 2019 onwards, every day Monday to Sunday at 8.00 pm. Debutant Shruti Das will be seen in and as 'Trinayoni', with Gaurav Ray Chowdhury opposite her.

Zee Bangla is the No.1 GEC in Bengal, leading in almost every slot with shows like 'Korunamoyee Rani Rashmoni', 'Krishnakoli', 'Bokul Kotha', 'Joyi', 'Joy Baba Lokenath', 'Sa Re Ga Ma Pa', 'Didi No.1', and so on. Zee Bangla remains the entertainment channel of choice for millions of Bengali audience with a mix of enviable fiction and non-fiction content.

Report By: ZB Marketing
Mail your feedback at: esselnewsletter@zee.esselgroup.com