Zee Café brings in the festive cheer, premiering new shows and latest seasons with two new content blocks - 'Along With The US' and 'Hollywood On Café' 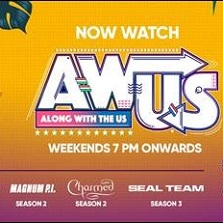 Lights, camera, action - this festive season, Zee Café has it all! It's time to sparkle-up your evenings as the fiesta begins this September on Zee Café. Join in the celebrations as the channel launches two content blocks with the biggest, freshest and award-winning shows in its long running content blocks- 'Along With The US' airing, weekends at 7 PM all through October and 'Hollywood On Café' starting October 14, weeknights at 10 PM. While 'Along With The US' features a mix of iconic and latest shows along with the U.S, 'Hollywood On Café' brings the scale and grandeur of Hollywood on television.

The stellar line-up for 'Along With The US' empowers entertainment enthusiasts to discover the cool, witness the new and watch it before anyone else, exclusively on TV on Zee Café. The block promises flavours from the comic universe to the medical hallways and from the fantasy world to the action-packed alleys, catering to the taste-buds of Zee Café's diverse viewers. The line-up features latest seasons of the most iconic shows on Zee Café – Grey's Anatomy S16 – a season of family, expansion and Supergirl S5 - touted as a 'fight for the soul'. That's not all! Together with an array of all new shows such as The Unicorn, Carol's Second Act, Seal Team S3, Magnum PI S2 and Charmed S2 available exclusively on TV on Zee Café and nowhere else, the block promises to leave you hooked.

What's more? With an unmatched cinematic experience, 'Hollywood On Café' features top-rated mini-dramas of Hollywood stature. Truly bringing the scale and extravagance of Hollywood on television, the block enables viewers to experience a Hollywood-level hangout only on Zee Café. The line-up features world-class shows on television including thrillers like LA's Finest, The Son and The Counterpart S2, along with the controversial plots like The Loudest Voice and City On A Hill. Each of these world-class shows feature Academy Award-winning cast and crew from the likes of Russell Crowe, Ben Affleck and Matt Damon and the Golden Globe winner Kevin Bacon among others.

“Over the years, we have built these content blocks to reflect the channel philosophy of All Eyes on New with the freshest shows and newest seasons. Last year, Along With The US grew the 7PM – 10PM slot viewership by 52% (BARC, NCCS AB 15-40-Megacities). Shows such as The Sinner and The Night Manager, as part of HollywoodOnCafé, saw a jump in viewership by 75% and 55%, respectively. This year we are sure the Zee Cafe subscribers will be delighted to watch returning favourites like Supergirl and Grey's Anatomy and discover 8 new shows” he added.

Bringing some of the choicest Hollywood blockbusters, prized dramas, international news and lifestyle content for the Indian viewers, the unique bouquet – Zee Prime English Pack - comprising &flix, Zee Café, LF and Wion, is priced at an attractive Rs. 15/- per month. That's not all! For those who appreciate nuanced cinema, &PrivéHD brings riveting and award-winning films that stimulate the minds as they show them the other side of cinema. Zee Prime English HD Pack comprising - &PrivéHD, Zee Café HD, &flix HD, LF HD is priced at Rs 25/-. Consumers can also subscribe to the Zee All In One Pack @ Rs. 59/- per month.

About The Shows:
Along With The US:
With the latest seasons of the Golden Globe Winner Grey's Anatomy S16, for the first time, catch what's brewing in the lives of your favourite surgeons from Seattle. In a high-powered new avatar of Supergirl from the DC Universe, watch the latest season of Supergirl S5, where Kara is seen in a deadly face-off against the most powerful secret organization Leviathan. Witness the Emmy Award winner Patricia Heaton essay the role of Carol who, at the age of 50, embarks on a unique second act of being a medical intern in the rib-tickling sitcom Carol's Second Act. Follow the lives of the elite unit of Navy SEALs as they train, plan and execute the most dangerous missions in the Prime-Time Emmy Nominee Seal Team S3. Teleport into the floral landscapes of Hawaii with the suave and skilled private investigator Thomas Magnum in the action-packed series Magnum PI S2. Uncover the origins of three siblings who discover their real abilities and 'the power of three' in an ultimate fight for vengeance with Charmed S2. Catch the Academy Award Winner Walton Goggins play the role of a single-father who embraces his new normal, in the laughter-riot series - The Unicorn.

Hollywood On Café:
Witness Jessica Alba and Gabrielle Union don the LAPD uniform in the cop drama LA's Finest as the duo take on the most dangerous criminals in LA and become a force to be reckoned with. Catch the rise and subsequent fall of the Founder of Fox News, Roger Ailes in The Loudest Voice as the series traces his journey to the top, featuring a star-studded cast comprising the Academy Award winner Russell Crowe, Academy Award nominees Naomi Watts and Seth MacFarlane. Taking on a new role, catch the Academy Award-winning duo Ben Affleck and Matt Damon as producers in the 1990s Boston-based crime-drama City On A Hill featuring Kevin Bacon essay the role of a corrupt yet venerated FBI veteran. Uncover the story of America's birth as a superpower with The Son as the show features the legendary Pierce Brosnan essay the central role of a ruthless businessman who struggles to connect with his children. Unravel the gateway to a new dimension in the sci-fantasy drama The Counterpart S2 featuring the Academy Award winning actor J.K. Simmons in the lead role.

So, discover on all things cool Along With The US airing weekends at 7PM, and prepare to be amazed with 'Hollywood On Café' premiering October 14, weeknights at 10 PM, only on Zee Café

To Know more, follow us on @ZeeCafe , Zee Café, zeecafeindia