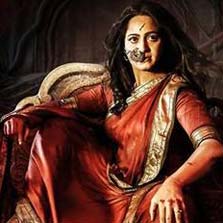 After her portrayals of strong, larger-than-life, meaningful characters in Arundhati, Rudhramadevi and Baahubali, Tollywood's favourite warrior princess, Anushka Shetty is back with a horror thriller movie Bhaagamathie. Zee Cinema, Home of Blockbusters will premiere this edge-of-the-seat thriller on Sunday, 1st July at 9 PM. Bhaagamathie is a trilingual movie directed by the talented G. Ashok and boasts of a stellar star-cast including Anushka Shetty, Murali Sharma, Prabhas Sreenu, Unni Mukundan, Jayaram and Asha Sarath. Full of mind blowing chilling moments, the movie is a perfect blend of deceit, revenge, drama, politics and action.

The highlight of the movie is Anushka's portrayal of two distinct characters - the charming IAS officer Chanchala caught in a political game and the ferocious, majestic – Bhaagamathie that is sure to mesmerize the audiences. The movie boasts of a unique narrative aided by an impressive screenplay with spine-chilling situations, elements of a thriller, unexpected twists and turns and a background score that propels the momentum further.

Actor Anushka Shetty said, “There's something for everyone in Bhaagamathie. There's suspense, romance, horror and light-hearted moments. Shooting for the movie was quite a challenge as I had to undergo rigorous training to prepare for two different characters and the horror scenes were difficult as I injured myself several times during the shoot. The entire team of Bhaagamathie has put in their heart and soul in this movie and I hope the audience will enjoy watching it on television. The movie promises to keep the viewers intrigued with its unique plot and several twists and turns.”

The movie revolves around Chanchala (Anushka Shetty), an IAS officer, who is in prison for murdering her fiancé. Few government officials decide to use her to dig up some dirt on Eeshwar Prasad (Jayaram), a minister with a clean image. CBI officer Vaishnavi Reddy (Asha Sharath) transfers Chanchala from the prison to a rundown palace believed to be haunted by the ghost of Bhaagamathie, a cruel queen. The insides of the mansion are filled with dim lighting, moving doors and other spooky elements. Suddenly people are tossed around by puppets and it seems like Chanchala is possessed by a spirit. What follows next is a whirlwind journey, where temples, priceless antique idols, innocent villagers, conspiracy, dirty politics and above all an ancient folktale of an all-powerful queen is involved.

What is the story behind the majestic queen Bhaagamathie and the haunted palace? And who will win in this Chanchala v/s Bhaagamathie spooky war?

To find out, watch the Zee Cinema Premiere of Bhaagamathie on Sunday, 1st July at 9 PM

Report By: Vidhi Sanghavi
Mail your feedback at: esselnewsletter@zee.esselgroup.com