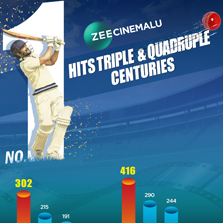 Zee Cinemalu, for the 21st week of the year 2019 has hit a new record scoring its highest ever GRPs after its launch wit 302 GRPs becoming the No.1 movie Channel in the Telugu market, a new milestone, making it the first ever Telugu Movie channel to mark this achievement (excluding IPL weeks).
Coinciding with the World Cup, on 30th May (Week 29), the channel aired 11 movies within a single day – presenting strong competition to other channels in the industry, and thereby making it the No. 1 Telugu movie channel across markets. Zee Cinemalu is No.1 in Hyderabad market scoring the highest ever ratings with 416 GRPs in Week 29 of BARC India ratings, setting a new benchmark as the only Telugu movie channel to achieve this feat.

Zee Cinemalu is No.1 in the last two weeks in both Urban and U+R markets, also No.1 for the last three consecutive weeks in Urban market.

In the week 29 of BARC India Ratings, Zee Cinemalu has the highest time spent across markets and has reached out to 52.3 Million people across the country.

The channel that has achieved its break even in its first full year after its launch, is geared up for many more records going forward. Kudos to the entire team!!

Report By: Ravi Raj
Mail your feedback at: esselnewsletter@zee.esselgroup.com