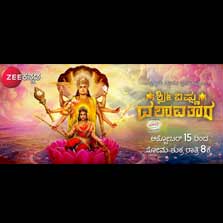 Director Dheeraj Kumar, and Creative Director Sanjay Guptha from Creative Eye Production House are producing the most-awaited, Shree Vishnu Dashavatara, for Zee Kannada and Zee Tamil simultaneously. The phenomenal graphics are a treat for the eyes, notably with every action and love sequence. The legendary mythological serial is created in a manner for the viewers to be able to directly associate with all characters playing their fictional roles with the touch of human emotion. The audiences will also receive the opportunity to witness all avatars of Vishnu for the very first time in the history of small screen television.

The plot begins with Lord Vishnu, played by Amith Kashyap, going against all odds to save the life of Brahma when he was being attacked by horrific demons; resulting in Goddess Lakshmi, played by Nisha B.K., exhibiting gratitude to Lord Vishnu for saving her brother's life. In return, Vishnu desires for Lakshmi to dwell in his heart and to become his Hrudaeshwari. The story goes on to establish the power of love by every God and Goddess coming together to unite Lord Vishnu and Goddess Lakshmi in holy matrimony.


Commenting on the launch, Raghavendra Hunsur, Business Head, Zee Kannada said, “At Zee Kannada, we constantly aim to give the best of entertainment with a pure blend of nostalgia to our ardent viewers, taking them back to their roots, culture and tradition. Moreover, we are proud to showcase a magnificent story such as Shree Vishnu Dashavatara is our first original production. Telling a story that has never been told before has definitely been a challenge. However, we are gladly obsessed with striving to be pioneers in every form of story-telling and therefore, are proud to offer our largest property to our Kannada audience with the launch of Shree Vishnu Dashavatara.”

Mythology is the trend this season in the small screen television industry. Zee Kannada is taking back their audience to their roots, with what was once an emotion of every child growing-up with mythology serials as reference to their bed-time stories, is now returning with the same nostalgia. The Kannada television entertainment market has always been accepting and excited about mythological tales and Zee Kannada has only grown further in the hearts of Kannada viewers with their successful mythological stories. Mahadevi, an enthralling tale of devotion and magic has been on-screen over the last 3 years due to popular demand. The recently launched Ughe Ughe Mahadeswara has mesmerized the audience with the legendary folk story of our land, the story of the Male lord Mahadeshwara.


Shree Vishnu Dashavatara, the most-awaited for launch in the Kannada television market, is assured to woo the viewers providing them a whole new experience this October.


Report By: Shriram BR
Mail your feedback at: esselnewsletter@zee.esselgroup.com