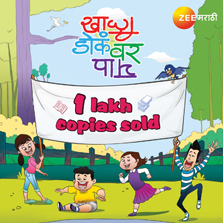 Zee Marathi recently launched 'Khali Doka Var Pay', 2nd edition of children special magazine. It received a tremendous response from the audience and a lakh copies were sold out in just 4 days.

The sole motive of this magazine is to keep the kids involved during their vacations, while subtly doing the task of imbibing the habit of reading.

The launch was supported by an extensive TV campaign and social media to create buzz around the magazine. With the intent of reaching out to the nooks & corners of Maharashtra, a canter activity was carried out & kids went gaga while they interacted with the canter. Interesting games with kids & older set of audience were carried out along with the sales of the magazine. We managed to sell 10000 copies across 20 towns in Maharashtra.

Priced at INR 100, the magazine is published by Granthali Publication. In its 2nd year, it has made a record sale of a lakh copies across Maharashtra in just 4 days. It defied all industry norms & beliefs further strengthening Zee Marathi's position in minds of consumers. It also reiterated to the industry that reading as a habit can be revived, especially amongst the kids, if good content is presented to the audience in an engaging way.

Having entered this arena, we have set a benchmark with the Diwali magazine and Kids Magazine and would continue to entertain our viewers in newer ways!

Report By: Ninad Bhalerao
Mail your feedback at: esselnewsletter@zee.esselgroup.com