Zee Mundo ties up with UNAM - the biggest University in Mexico 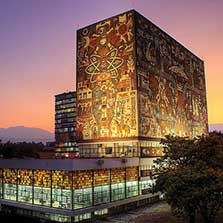 ZEE Mundo is delighted to tie up with UNAM to introduce its students to the Indian Culture!

The National Autonomous University of Mexico (UNAM) is the largest and most important university in Mexico and Latin America with over 100,000 students. It ranks highly in world rankings based on the university's extensive research and innovation. UNAM's campus is a UNESCO World Heritage site that was designed by some of Mexico's best-known architects of the 20th century. The university received its autonomous status in 1929, which gives it the freedom to define its own curriculum and manage its own budget without interference from the government.

As a first step, UNAM, with the help of ZEE Mundo will hold an Indian Film Festival starting next week.

This festival at UNAM campus will be called "Semana de la India- presented by the Embassy of India in Mexico and ZEE Mundo". The inaugural on May 27th will start with speeches from the Ambassador of the Embassy, the Director of CEPE UNAM and ZEE Mundo. We will showcase Dangal: El Honor on the opening night and Chennai Express on the closing night followed by Indian food.

There will be various Indian cultural activities like Tabla and Sitaar, Yoga, Kathak, Bharatnatyam, Mohiniyattam, Odissi, and traditional Indian clothing display for the students to get a taste of India.

ZEE Mundo is available on SKY and www.zeemundo.com