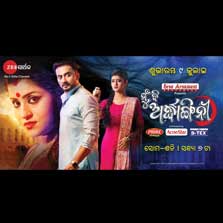 It showcases a widower who is guilt ridden and doesn't want to move on but clings to the memories of his late wife. A young girl who is in love with the man despite the age difference wants to see him happy at any cost. The family wants nothing but harm for the man while this girl fights all hurdles and unites with him, to make him realize that life always gives a second chance and one should not let it go. There is a fantasy plot interwoven of the 1st wife appearing as a ghost, to add to the entertainment of viewers.

Replacing the earlier show, Manini in the 7pm time band, this show is expected to keep viewers glued to the sets.

Zee Sarthak known to cater to all genres of audience has brought in a double dose of appetizers for lovers of mythology and spirituality.

Based on the life and teachings of Shri Shirdi Sai Baba, the show would be a delight for both religious and spiritual seekers as well as people who enjoy mytho in general.

Report By: Rajesh Mishra
Mail your feedback at: esselnewsletter@zee.esselgroup.com