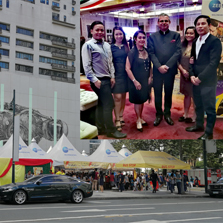 2019 marks the 70th anniversary of the India Philippines Relation with Zee Sine as the official media partner.  Zee Sine, a 24/7 Bollywood movies channel fully dubbed in Tagalog, was the ideal media channel for showcasing a fusion of both cultures throughout the years.

The festivities started with a one day Indian Food Festival at Bonifacio Global City Mercato Central during the weekend. The event was attended by hundreds of Filipinos and Indians alike. The Zee Sine showreel was aired at the function on the big screen giving Filipinos a taste of Bollywood entertainment.

"We are very happy for Zee to be part of this celebration as Zee Sine is indeed a great way of sharing our biggest assest of Bollywood films with the country. We share many things in common with the Filipinos, especially for love of movies.” said H. E. Ambassador Jaideep Mazumdar.

"The celebration of the 70th Anniversary of India Philippines Diplomatic Relations is a good opportunity for us to highlight the efforts of Zee to bring Indian culture close to the Filipinos." Says Mr. Harish Goyal - CEO APAC & AFRICAS

Many other events are planned for the rest of the year including a Zumba Bollywood nite, Yoga day and Indian Film festival. All these plans are in cooperation with 'Zee Sine, Bollywood na Tayo'.

Report By: Maria Liza Ginting
Mail your feedback at: esselnewsletter@zee.esselgroup.com