Zee Studios releases the official teaser of Manikarnika: The Queen of Jhansi 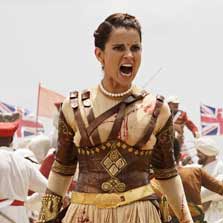 Zee Studios' Manikarnika: The Queen of Jhansi tells the epic journey of a courageous and fearless woman who fought for independence. And, who better than Kangana Ranaut to portray India's fiercest warrior queen, Rani Lakshmi Bai on the big screen. The official teaser of the film, that was released yesterday, has received impressive response from trade to fans alike. The teaser brings out all the elements that one looks for in a complete entertainer.

Mounted on a large scale, the film has roped in the best of technicians, multiple national award winners - Kangana Ranaut, Shankar Ehsaan Loy who composed the music of the film, to lyricist, Prasoon Joshi - it's a dream team that has come together to work on the film that promises to provide true cinematic experience, high on content. Not just that, Hollywood's celebrated action choreographer, Nick Powell has designed action in the film.


Talking about the teaser, Shariq Patel, CEO, Zee Studios shared, “A tribute to Rani Lakshmi Bai, the film celebrates and salutes the extraordinary journey of India's fiercest warrior queen, who sacrificed her life fighting for freedom. We are delighted and grateful for all the love and appreciation the audiences have showered on the teaser!”