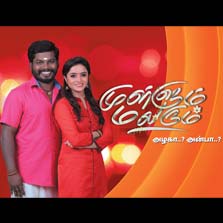 Zee Tamil is launching a new fiction show, Mullum Mallarum, as a part of the channel's evening prime-time segment. A love triangle like no other involving hard-working Dharmadurai, the charming Kalaiarasan and the beautiful Mahalakshmi, Mullum Malarum will be aired on weekdays starting 27th November between 6:30 and 7:00 PM.


The story revolves around two brothers - Dharmadurai, an uneducated blue-collar worker who works relentlessly to improve the financial status of his family but is not taken seriously by his loved ones and his brother Kalaiarasan, an educated professional who is loved and respected by everyone around him. The show unfolds as the two brothers are in a quest for love and companionship. The twist in the plot is when the beautiful Mahalakshmi enters their lives. While Kalaiarasan and Mahalakshmi are engaged to be married, fate has other plans in place as Dharmadurai unknowingly comes in the way and this relationship comes to a bitter end.


The character of the lead hero, Dharmadurai, is played by the actor Munish Rajan from Zee Tamil's Yaaradi Nee Mohini, while actor Pandi Kamal plays the role of his brother, Kalaiarasan, who is making his Zee Tamil debut with this role. The vivacious actress from Zee Kannada's fiction show Mahanadi, Tejaswini Shekar, will be portraying the role of Mahalakshmi. Notable actors who can be seen playing other important characters include actors Vanitha, Janaki, Balambika and Jayamani to name a few.

Mullum Malarum is yet another feather in the fiction cap for Zee Tamil, where the plot is carefully crafted for the viewers so as to deliver a perfect mix of drama, entertainment and emotions.

Watch Mulum Mallarum every Monday to Friday starting 27th November 2017 at 6:30 p.m. only on Zee Tamil!

Report By: Srimathi Ramanujam
Mail your feedback at: esselnewsletter@zee.esselgroup.com