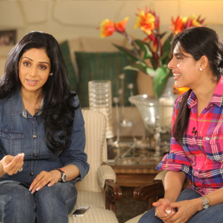 'My Name is Mangamma' is the story of a 28 year old girl. Her biggest regret in life is that she is named 'Mangamma' by her parents and she tries not to acknowledge that name and calls herself 'Maggi'. Maggi works for a three star hotel as chef to support her mother, an unmarried younger sister and frequent demands from another married younger sister. She blames herself for not getting married because of her old fashioned name but the actual reason is different - It is because she is loud, impolite and a tom boy. For this reason, her mother finds it very difficult to find a groom to match her. There follows a comedy of errors, confusion, emotions running wild and many a twist and turns sure to keep the audience in splits.

Popular yesteryear heroine Sri Devi endorses the serial 'My Name is Mangamma'. While speaking about the serial Sri Devi said, that Maheswari is back to acting after a break in this hilarious serial and her character will be a laugh riot. Celebrity endorsement for a serial is a first of its kind in the Tamil Nadu television industry.

Watch 'My Name is Mangamma' on Zee Tamizh from today at 8pm to 8.30pm, Monday to Friday.

Report By: Prakash Seshadri
Email your feedback to: esselnewsletter@zeenetwork.com