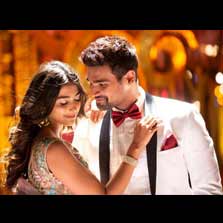 Zee Telugu promises to fill your weekend with action and drama! Super Hit Telugu movie Sakshyam, starring Bellamkonda Sreenivas and Pooja Hegde as leads, will premiere on September 23rd at 5:30 PM only on Zee Telugu and Zee Telugu HD.

Sakshyam is a story about Vishwa, a rich NRI who is a video game designer, and falls in love with Soundarya in New York. He later chases her to India to confess his love to her. Vishwa was born to a rich family in an Indian village where his entire family was killed by a gang of four evil goons led by Munuswamy (Jagapathi Babu) who leaves no evidence of the murder. However, Vishwa was miraculously saved by a cow and was later adopted by a NRI business man in New York.


To his realization, Vishwa lands up to the same village where he witnessed the tragedy as a toddler, while pursuing his love in India. While the villains are unware of Vishwa's escape from the incident, what follows next is how the five elements of nature come together to serve revenge to Munuswamy.


Directed by Sriwass, this movie captures excellent action sequence and beautifully portrays the concept of Karma by showcasing all the elements of nature coming together to punish a bunch of goons for their crimes.


Report By: Ravi Raj
Mail your feedback at: esselnewsletter@zee.esselgroup.com