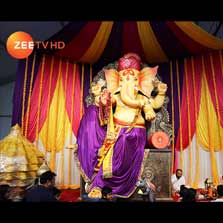 North America's grandest Ganesh Utsav was held in New Jersey from September 13th & ending with Visarjan on September 17th. The auspicious festival like last year, was organized in two cities, Jersey City & Woodbridge. Spanning for 5 days, the festival was graced by over a half a million people in attendance.
Zee TV Ganesh Utsav not only keeps getting bigger but it also keeps getting better. The Entertainment line-up for this year was nothing short of phenomenal. Not one, not two but three artists provided the entertainment factor at this year's Zee TV's Ganesh Utsav 2018. Saturday's entertainment was kicked off by none other than the Disco King & the original king of good times, Bappi Lahiri. Bappi Lahiri along with Anuradha Palakurthi performed on some of the most iconic tracks like, Inteha ho gayi & Yaar bina chain kaha re, which was received to tumultuous applause by the thousands present. Esha Gupta entertained the crowd with her dance moves & some quirky Q&A with the audience. The cherry on the cake was our very own ZEE TV SAREGAMAPA host, Aditya Narayan, who provided a “Rockstar,” performance for all present at the venue.

India.com branding adored each & every inch of both the venues. India.com green screen photography booth was a monstrous hit amongst everyone who attended. All the pictures clicked will be uploaded on the India.com portal where everyone will be able to view & download them at their own leisure. And for the kids the biggest attraction was the India.com balloons, which were visible from all the sides of the venues.

Jallosh, Dhol Tasha commenced the Visarjan ceremony with some foot tapping & energetic Nashik Dhol that echoed through the entire locality of Jersey City & Woodbridge. With emotions high & energy all pumped up, people participated with unmatched fervor to bid farewell to “The Lord of New Beginnings.” The crowd dance their hearts out chanting, “Ganpati Bappa Morya.” Zee TV's Ganesh Utsav 2018 single handedly displayed the true spirit of Ganesh Utsav at the same time bringing joy to millions of Indians residing in America.


Report By: Pooja Sharma
Mail your feedback at: esselnewsletter@zee.esselgroup.com