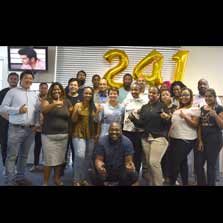 Zee World in Africa has broken all records to deliver 241 GRPs, a phenomenally high rating since launch in 2015. Zee World continues to grow and take more market share from the local content channels while entering its 4th year since launch.


Zee World competes with all leading African GEC on the pay platform in Africa. As per Geopol in Nigeria, Zee World had a record 5 million viewers on its S3 episode 36 of the THE PROMISE 'KASAMH SE' this month.
Zee World's 'TWIST OF FATE S2' started with a SWAHILI language track that increased viewership by a whopping 36% in Kenya as per the DStvi report.

Zee World ranks #9 on the overall South African TV channel list and its Average Daily Reach is 5.54% within the Pay General Entertainment channels.

“Zee World is Game Changer in the African landscape; our continuous growth shows that we have captured a very important and loyal viewership. We will build on this by consistently providing innovative and engaging programming to our viewers,” says Harish Goyal, CEO of Asia Pacific and Africa at Zee International.

Report By: Tom Kiat
Mail your feedback at: esselnewsletter@zee.esselgroup.com