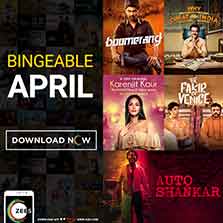 After the global digital premieres of blockbuster hits like Simbaa, Uri, Namaste England and Veere Di Wedding, ZEE5 has unveiled yet another drama-packed, star studded line-up of digital premieres and originals for its international audiences.

Bringing the very best of desi entertainment to audiences around the globe, ZEE5's line-up for April includes World Digital Premiers of The Fakir of Venice starring Farhan Akhtar, Why Cheat India starring Emraan Hashmi as well as South Blockbusters Boomerang (Tamil) and Allu Ramaendran (Malayalam). All this coupled with a slew of ZEE5 Originals like the season finale of Karenjit Kaur - The Untold Story of Sunny Leone and POISON which stars Arbaaz Khan in his digital debut.

Archana Anand, Chief Business Officer - ZEE5 Global said, "At ZEE5, our entire focus is on bringing great stories to life and sharing them with our audiences across countries. We have a fantastic lineup of stories for April that cut across genres and themes, all backed by a stellar cast. I'm delighted to share these with our ZEE5 audiences around the globe."
ZEE5 is available on Google Play Store, iOS App Store, www.ZEE5.com as well as on Samsung Smart TVs, Apple TV, Android TVs and Amazon Fire TV