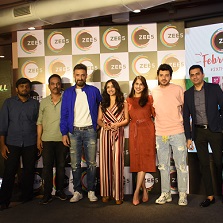 The largest OTT player, ZEE5, unveils a power-packed line-up for the month of February and promises #2XTheLove this month.

The evening started with a unanimous cheer and had a celebratory vibe. The host spoke about the content pieces which are part of the February line-up and engaged with the cast and crew present.

Mr. Chhapekar had an engaging conversation with the actors of Shukranu present i.e Divyenndu, Shweta Basu Prasad and Sheetal Thakur. The conversation overarchingly was about the title of film and the funny moments which happened during the shoot.

The evening also had another engaging conversation between Parag Chhapekar and the star cast of Operation Parindey - Rahul Dev and Kunal Kumar. The conversation was light where the actors spoke about shooting in Bathinda in extreme winters, using the Punjabi dialect and sharing details about Rahul's look in the film.

Talking about the February calendar line-up, Aparna Acharekar, Programming Head, ZEE5 India said, “February is a special month for us and we will soon be celebrating our second anniversary on 14th February. It has been an exciting journey up until now and we are pushing the envelope every day to ensure our viewers have a vast library of content on their fingertips. Our original series and acquisitions are in lieu of presenting content where each person can find something suitable to watch. We promise to continue delivering at this rampant pace.”

The month will then witness the release of a high-octane action thriller film based on one of the most controversial jailbreaks in the history of India. Starring Amit Sadh and Rahul Dev in pivotal roles the film releases on 28th February 2020.

The same will be followed up with the release of a turbulent love saga 'It happened in Calcutta' starring Karan Kundrra and Naghma Rizwan releasing on 29th February 2020.

In addition to Original Content, the platform will also add to their content bucket with interesting film acquisitions this month namely Satellite Shankar & Commando 3 in Hindi and Hajiri in Marathi.

ZEE5 also has a power-packed AVOD line-up with varied content releasing on the platform across languages namely: