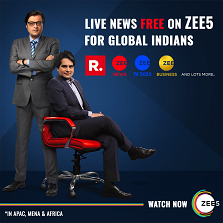 ZEE5 Global today announced that it was making its top news channels available free for streaming in select countries in APAC, and in MENA and Africa. Audiences in these countries will be able to access 15 news channels and watch content like world headlines and business, sport, entertainment, and other trending news free of charge in seven languages; Hindi, Bengali, Marathi, Oriya, Gujarati, Urdu and Punjabi.
The free catalogue includes some of the most reputed channels e.g. Hindi news channels like ZEE News, ZEE Business, Republic TV as well as news in Bengali and Marathi from ZEE 24 Ghanta and ZEE 24 Taas respectively, amongst others. With this, audiences will have access to top ranked shows like Fast Money on ZEE Business, Crime Alert on ZEE Hindustan and DNA with Sudhir Chaudhary on ZEE News.

Commenting on the initiative, Archana Anand, Chief Business Officer, ZEE5 Global said, ''We're very excited to now offer all this prime news content for our global audiences to access free, so they can stay in constant touch with what's happening back home in India and in their home states. When living abroad, one keenly follows all the news from back home, and that's why we decided to make this content free so that's its easily accessible to all.''

Viewers can also access ZEE5's entire portfolio of 30+ news channels including prominent channels like BTVi, WION, Bloomberg Quint and more as well as 100,000 hours of entertainment content by subscribing to any of ZEE5's subscription packs.