ZEE5 intensifies outreach in the Middle East; rolls out a slew of initiatives 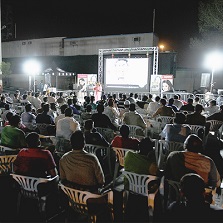 Close on the heels of its success across various SAARC markets and its recent rollout of content in international languages, global digital platform ZEE5 now embarks on the next phase of its international journey with its new global campaign 'Full-on Entertainment'. Deepening our connection with audiences across countries, this new campaign will define ZEE5's global identity as the go-to destination for high-impact, high-octane entertainment.

As part of this campaign, the global streaming platform now rolls out a slew of initiatives across multiple priority markets, with the Middle East being amongst the first few that it initiates its immersive customer engagement activities in.

South Asian audiences in the Middle East get treated to a set of on-ground experiences especially curated by ZEE5. The initiatives include a 4-week movie experience every Thursday at different locations. The first screening was held at Al Naboodah Ruwayyah in Dubai on 4th July and will be followed by another at DIP 2, Dubai on 12th July. Over the next few weeks more screenings will be organised at several other locations including Jabel Ali and Saja Sharjah. ZEE5 will screen the Bollywood box-office hit Simmba, starring Ranveer Singh and Sara Ali Khan, giving audiences a taste of classic Indian entertainment filled with drama, action and emotion.

ZEE5 has also partnered with leading local brand Choithrams and looks to further increase this footprint through these and other partnerships.

Commenting on the initiatives, Archana Anand, Chief Business Officer, ZEE5 Global said, ''Given the vast diaspora of South Asians in The Middle East as well as its appetite for desi content, this is the first of the three markets where ZEE5 kicks-off a range of consumer engagement activities. Our new campaign 'Full-on Entertainment' invites people into a world of entertainment that takes them on a journey of emotions and keeps them on the edge of their seats. For this we are rolling out a multitude of interactive initiatives, where we have the chance to engage with our audiences across the Middle East and build deep conversations with them."